Truth time: I’m allergic to caffeine. My heart starts racing, my stomach gets weird, and I get all hot and headache-y. So I tend to stay away from coffee, and stick to herbal teas.

But dammit, I love the taste of it.

So, I stick to decaf, while Husband has his fancy cortados. He’s a bit of a coffee snob, having complained that the coffee in Italy on our honeymoon wasn’t as good as those in Australia (hey, there’s really good coffee in Australia!). So, we head out for coffee every now and then together, and I order my decaf and he has his proper caffeinated stuff, and we often discuss where in Boston we’ve both had good coffee. Plenty of places in Boston refuse to serve decaf (rude), or they serve old decaf (it tastes super bitter and off), or they secretly serve it caffeinated and pretend it’s decaf (my stomach knows the difference, folks!). This list, I guess, is a mix of “Good Coffee” and “Good Decaf”, judged based on whether the place has good regular caffeinated coffee as well as decaf. 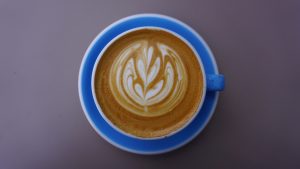 I mean, any coffee looks good in a sky-blue mug with a matching plate underneath. But Broadsheet‘s doesn’t just look good, it tastes good! Not too milky, not too weak. Just right. 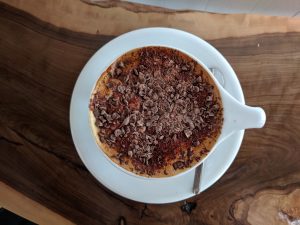 I have a soft spot for this place, because one of the owners is an Aussie from sunny Brisbane. So, of course there’s chocolate on top of the cappuccinos. This place is tucked away in what’s known as the Leather District in Downtown Boston. A fellow Aussie told me about this place, so I absolutely had to try it out! 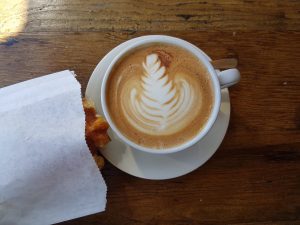 Number one, in my book. And in Husband’s book (because let’s face it, you’re more likely to trust him over me, seeing as he drinks caffeinated coffee). Not only do they have exceptional mochas (using Somerville’s own Taza Chocolate!), but they also have fantastic regular coffees. Oh, and their liege waffles are incredible.

Have you got a favorite place to get coffee? Let me know in the comments!