On the day when husband was feeling 100x better than any of the other days in Milan, I decided to do my ‘Best of Milan’ day. I have done this before, where I’ve chosen to see the best of a city when things haven’t been so great. The last time I did one was in Brussels, after I had quit my job, gone on a trip, and wasn’t sure what I was coming back to in terms of my career. This time, it was because husband had been really ill for the past few days, and we both needed some cheering up. 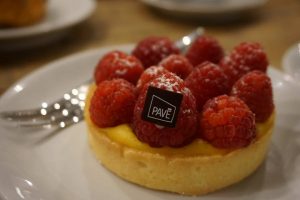 I think I may have read at least 20 articles about breakfast in Milan. In Italy, breakfast isn’t like it is in England, Australia, or the US. There’s no scrambled eggs with toast, no smashed avocado, and no acai bowls (thank god). Breakfast, like in France, is all about the fresh pastries and coffee. And boy, do they take their coffee seriously. I’ve watched five people walk up to a counter in a coffee shop, each put 1 Euro down (1.40AUD), take a shot of coffee, and walk out. For the rest of us, it’s croissants and cappuccinos, and it’s not seen as the main meal of the day.

In most articles I read, Pavé was mentioned. Pavé this, Pavé that, Pavé is so great, etc. When you’ve read the name Pavé twenty times, you’re likely to sigh, say “alright, I get it!” and go to it. It was a 38-minute walk from our apartment (which was near the Duomo), and not in the best part of town. But once we tried the pastries, we understood why it had been mentioned so many times. Husband had the crostata e frutta (a creamy pastry covered in fruit), and I had (don’t judge me for this) a pain au chocolat and a treccia al caffe (coffee braid). And it was all so delicious, we couldn’t understand why no other pastry had ever tasted this good. Husband nodded at me and said “yeah, this was a great recommendation”. But it was only the beginning. 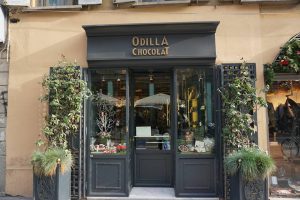 I had also read of a caramelle (sweet) shop in the Brera district, where they adorned their chocolates with lilac candies. Little did I know that we would stumble across that very place quite accidentally. The owner of the shop was so lovely. Her English was so great, which was a relief for us, since our Italian didn’t extend much beyond ‘Gli gatte beviano l’aqua’ (‘the cats drink the water’ — thanks Duolingo). She explained how the chocolates were from Torino (Turin), which is on the west coast of Italy. For anyone who hasn’t heard of Turin, it’s basically one of the chocolate capitals in Europe. It’s where the first ‘chocolate house’ was made (a place which serves hot chocolate and chocolates). It has a huge international chocolate festival each year. Basically, it’s a big deal over there. The owner of the shop showed us what each chocolate was, and even went so far as to give us some to try. The reason this is important is because it’s not like how it is in Australia where they have a dedicated ‘free chocolate’ area, where they dump the smallest pieces onto a plate. No, this was actually one of the chocolates on display. She took it out, unwrapped it, and handed it to me. We bought about eight chocolates, and requested the lilac candies on top. All in all, it cost us about 6 Euros (8.50AUD). 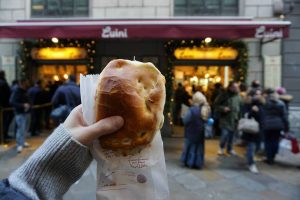 Ahhhh, where do I start with this one?

Alright, let’s see. In my research before the honeymoon, I kept coming across the word ‘panzerotti’. I didn’t really take much notice, and just thought it was some sort of pastry. Oh, past Charlotte, how wrong you were.

I posted in the Sydney Food Bloggers group, asking for suggestions for the best food in Milan. Three people suggested Luini. I researched it, and realised I had already read about it in several blogs, reviews, and travel guides. Of course I had to go.

When we got there, the line was long. We both groaned, thinking it would take years to get to the front. But it took merely a few minutes to get to the front, and we then had to make our decision fairly quickly. I opted for the pomodoro e mozzarella (cheese and tomatoes), and husband went for the mozzarella, pomodoro, acciughe, olive nere (cheese, tomatoes, anchovies, and black olives). There’s nowhere to sit to eat it, so you either have to stand nearby, or walk while eating it.

That first bite…woah. I’d never had anything like it. Imagine a pizza with cheese and tomato. Now imagine that soft, doughy base of the pizza, right where the tomato sauce and dough meet, where the dough gets extra doughy because of the sauce. How great is that doughiness?! Alright, now picture the crispiness of the outside of a baguette. Alright, next, think about a pocket of bread made out of the outside of a baguette, and the inside doughiness of a pizza with cheese and tomato. And that’s what a panzerotti tastes like. It was equal parts crunchy and soft. I could have had five more. Husband was pretty damn impressed, saying that it was the best thing he had eaten in Milan. And I had to agree with him. It was fantastic.

Luckily, we’ll be back in Milan towards the end of our honeymoon, and we know exactly where we’ll be going for breakfast, lunch, and dinner. Oh, and they also do sweet fillings, so that’s going to be amazing to try.