I’ve been living in Boston for 6 months.

I still can’t believe it’s been that long. I can still remember the anxiety I felt when we first moved, the fact I didn’t know anyone, how I curled up in a ball in our hallway sobbing about leaving the apartment.

A lot has changed.

We’ve got a fantastic apartment, a close-knit group of friends, and quite a lovely life. It seems like there’s always something to do in Boston, and we love the ever-changing seasons — it snowed on Saturday and will be a balmy 20C (68F) on Wednesday! We’ve had my in-laws come to visit, and we just said farewell to my sister after five days together in Boston. I’ve become pretty good at creating itineraries, and have crafted one for my dad, who’ll be visiting in two weeks. The question is, what’s worth carving out time for in Boston? 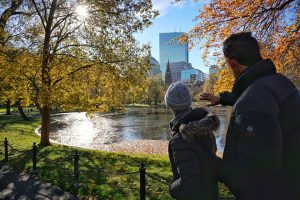 The first public botanical garden in the whole of America, Boston Public Garden was established in 1837. It’s incredibly stunning, with a beautiful pond in the centre, along with a little island for the Garden’s ducks. The squirrels in the Garden are ridiculously friendly, with many of them feeling comfortable enough to approach visitors. Boston Public Garden is home to over 80 different species of plants, and is maintained by many volunteers and members of Friends of the Public Garden. I love to bring out-of-towners here, as it’s so quiet and I love seeing their reaction to the squirrels (hey, I had/still have the same reaction when I moved!). Plus, it’s pretty as hell, with weeping willows, elm trees, and redwood trees. 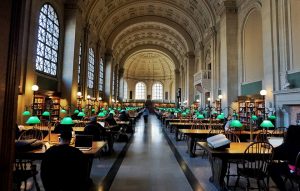 It doesn’t matter how many times I go here, I’m constantly in awe at how beautiful this library is. From the green lamps adorning each desk to the intricate detailing on the ceiling, it’s just such a nice place to visit. It was established in 1848, and was the first large free municipal library in the United States (crazy!). It boasts 23 million items, including rare books and manuscripts, maps, musical scores and prints. On the outside of the building, written for everyone to see, are the words “The Public Library of the City of Boston built by the people and dedicated to the advancement of learning”. It’s just another reminder of how incredibly education-focused the city of Boston is! 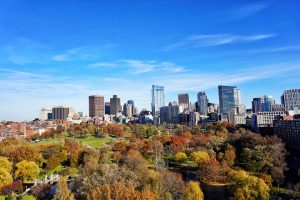 When my in-laws were in town, we were lucky enough to get a peek at Boston from the top of the Taj Hotel when the rooftop was closed to the public! Between March-November, you can head to the rooftop for Sunday brunch, overlooking this same beautiful view (can’t believe I was able to snap this photo!). It’s a fantastic view, and one I can’t seem to replicate anywhere else in Boston! 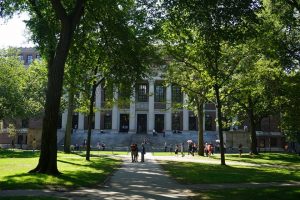 I’m pretty sure you can’t go to Boston without popping into Harvard. It’s the oldest university in America (are you seeing a pattern here?), and was established in 1636. It has lovely lush greenery everywhere, and each gate has inspirational quotes on it as you walk in. Harvard Square is buzzing with young academics and future leaders. It’s pretty inspirational! 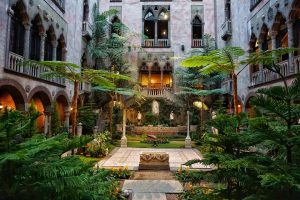 Opened in 1903 by the insanely wealthy Isabella Stewart Gardner, the museum holds some of the most beautiful pieces of artwork from around the world. She inherited a large sum of money from her father after he died, and used that money to collect valuable artwork. From furniture to sculptures, tapestries to paintings, the museum is like a time vault! The website says the museum has “more than 7500 paintings, sculptures, furniture, textiles, silver, ceramics, 1500 rare books, and 7000 archival objects-from ancient Rome, Medieval Europe, Renaissance Italy, Asia, the Islamic world and 19th-century France and America”. To top it off, there’s a beautiful garden in the centre of the museum (pictured above), and the museum holds a party once a month (a lot of fun!). 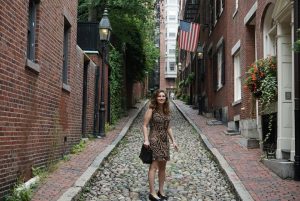 Reminiscent of a small European town, Beacon Hill is one of the most prestigious suburbs in Boston. When we were looking to move to Boston, I assumed most people lived there (turns out only the very wealthy do!). The cobblestone streets and beautiful brick homes with colourful doors make Beacon Hill a great tourist attraction. Acorn Street (pictured above), is one of the most photographed streets in the United States, and you can see why! It’s easy to forget you’re in the US when walking around this area. 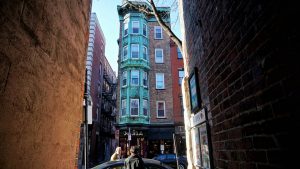 Known as “Little Italy”, the North End transports you to various cities in Italy, all within walking distance from one another. There’s the famous Mike’s Pastry (though locals prefer Modern Bakery), Paul Revere House, and restaurants that make you feel like you’ve walked into some tiny village in Italy. The architecture stands out, with the contrast between wrought iron and brick (which can also be found on Newbury Street and Back Bay!).

So next time you have a visitor coming to Boston, take them to these places! And if you have a favourite area of Boston for visitors, let me know in the comments 🙂