Husband finally got better. My bag was his pharmacy for a few days, but he got through it and came out the other side with more energy than he had before the trip. Milan was not really the honeymoon, but Bologna onwards would be.

We picked up our car, and I circled the parking lot twice, just to make sure I could figure out how to drive the damn thing, plus to prepare myself for driving on the other side of the road. I had heard things, terrible things, about how the Italians were on the road. Crazy, spontaneous, aggressive.

None of that was true.

Yes, they didn’t always use their indicators, but they gave plenty of room for me to break before they glided in front of me. Yes, they raced past me at what seemed to be 180km/h, but it was necessary if they wanted to overtake me (speed limit was 130km/h, and I was going 135km/h). Yes, they honked if I got confused about which lane I needed to be in, but that’s the same in every country. Really, the only issue we had was in terms of directions on Google Maps (it didn’t really give us much warning when we had to turn). Other than that, it was great. I think I went close to 150km/h at one point, and I was probably one of the slowest on the road!

We arrived in Bologna, and I have to say that it was love at first bite. Literally. We got to our apartment (basically in the city centre), and wandered down our street to find a place to eat. We walked into Caffè del Mercato, a tiny restaurant nearby. We had only walked in because their aperitivo looked so good from the outside. We sat down in this tiny space, knees basically knocking those of the people next to us, and each ordered a wine. For 6 Euros each, we could have mini paninis, pasta, salad, cheese, and bread, along with our glass of wine.

Now, Bologna is in the Emilia-Romagna region, which is known for three things: parmesan, prosciutto, and pasta. Since we don’t eat prosciutto, we knew we had to try the other two. So, we both ordered plates of pasta, and dug in. 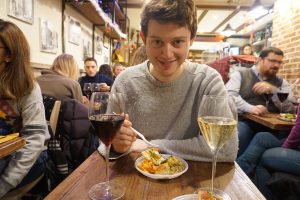 I don’t think I’ve ever tried pasta like the pasta we had on our first night in Bologna. We looked at each other, and husband said “I love Bologna”. We had only been in the city for about an hour!

Across from our apartment was Osteria del Sole, the oldest listeria in Italy, dating back to 1465. And on a Saturday night, we joined the hoards of people who congregate outside it to drink in the streets. We walked in, and were taken aback by the sheer number of people inside. It was almost impossible to reach the counter, but when we did, we said “una prosecco, e una vino rossi”. They were vino de casa (house wines), so they weren’t anything spectacular, but the experience of just being in such an old establishment was good enough for us to go for a second round. We stood in the streets of Bologna, sipping our wines, and listening to the people chattering away in Italian around us. As we were about to leave, someone elbowed me, and said “Oops, sorry!”. I swung around and said “Did you just say ‘sorry’?” It was a guy around our age. He looked a bit embarrassed, and said “Yeah, I should have said scuza…” in an American accent. We hadn’t heard anyone speak English in quite a while (Italians are pretty proud of their language, so most don’t speak English). After chatting for a bit, the guy said to us “Don’t you feel as though we’re in on some secret? Bologna is amazing!” We agreed, it really was, and we couldn’t believe how fortunate we were to have come to such a great city. 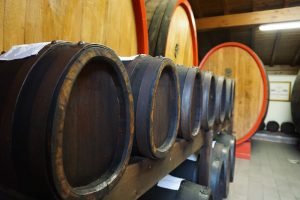 The rest of our Bologna trip was spent eating food, drinking wine, and wandering the colourful streets around us. We’ll have to go back, and seriously recommend it as a city worth visiting!

Have you been to Bologna? Where did you go? What was your favourite thing about it?