About four years ago, my sister turned 17. She asked me to make her a cake, so I got to work researching all the recipes I could find. I was still living at home with my parents, so had access to a pretty great kitchen. I searched for a double-layer chocolate cake, and found Ina Garten’s famous recipe. I remember it well because it included buttermilk and a cup of freshly brewed coffee.

Whilst the recipe asks you to create a chocolate buttercream, I decided that my 17-year-old sister and all of her friends would probably prefer something a bit different. And so, I made cookie dough and mixed it with some icing sugar to create a beautiful, buttery cookie dough icing to go between the two cakes. On the top, I placed bright blue buttercream, with the number ’17’ formed with the help of some M&Ms. The sides were bare, so you could see that it had two layers. It was stunning, and my sister and her friends raved about the cake for weeks.

A few weeks later, armed with the same cake recipe, I created a raspberry-meringue-iced double-layer chocolate cake for a family dinner. Fresh raspberries adorned the top of the cake, with the layers exposed on the side. My family begged me to make it again, but I focused my efforts on cupcakes instead. I used the same cake recipe to make mocha cupcakes with caffeinated icing and a single coffee bean on top.

And then I moved out of home. And the baking stopped.

I’m not entirely sure what it was. Was it the fact I didn’t have a big enough kitchen? Didn’t have enough time? Didn’t have the right equipment? All of the above?

Over the past four years, I’ve moved out of home, moved in with my boyfriend, bought an apartment, got married, and worked in the field I love. But when my husband decided to have a birthday party over the weekend, I knew I needed to find that recipe. All I remembered was that it had coffee and buttermilk, and had two layers. And that was it.

On the day of the party, I had basically given up. I woke up early, and went to go do some more research. By page 21 on Google Images, I found a photo that looked familiar. I downloaded it, uploaded it to Google Images, and found the recipe.

I can’t really explain that feeling of finding a recipe you haven’t made in four years. We went and bought the ingredients, and I got to work. I made the two layers, but realised that my cake tins were far too wide, so the cakes would come out quite thin. So, two more cakes were made, with the aim to create my first four-layer cake. The chocolate buttercream frosting was completed, and spread across each layer, including the top. I stared at the bare sides, the frosting obvious to the naked eye. And I grabbed my spoon and painted the sides with the frosting. “I will do this, it needs to happen,” I told myself. And it worked. I grabbed the packed of M&Ms and poured it over the top of the cake, until no frosting could be seen. I then grabbed some sprinkles, held onto the cake stand, tilted it to the side, and applied the sprinkles as I turned the stand. Sprinkles fell to the ground, but it didn’t matter. I was manic, people would be arriving in only a few minutes.

It was glorious. The best part is, the recipe makes sure that you don’t leave the cakes in the oven to the point where it’s dry. Instead, it’s sticky and soft. 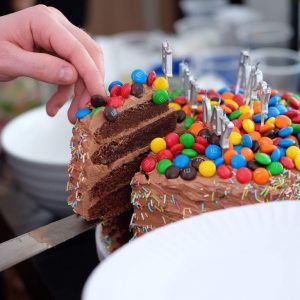 Here’s the recipe for two layers (not four):

Butter, for greasing the pans

Sift the flour, sugar, cocoa, baking soda, baking powder, and salt into the bowl of an electric mixer fitted with a paddle attachment and mix on low speed until combined. In another bowl, combine the buttermilk, oil, eggs, and vanilla. With the mixer on low speed, slowly add the wet ingredients to the dry. With mixer still on low, add the coffee and stir just to combine, scraping the bottom of the bowl with a rubber spatula. Pour the batter into the prepared pans and bake for 35 to 40 minutes, until a cake tester comes out clean. Cool in the pans for 30 minutes, then turn them out onto a cooling rack and cool completely.

Place 1 layer, flat side up, on a flat plate or cake pedestal. With a knife or offset spatula, spread the top with frosting. Place the second layer on top, rounded side up, and spread the frosting evenly on the top and sides of the cake.

Chop the chocolate and place it in a heat-proof bowl set over a pan of simmering water. Stir until just melted and set aside until cooled to room temperature.

In the bowl of an electric mixer fitted with a paddle attachment, beat the butter on medium-high speed until light yellow and fluffy, about 3 minutes. Add the egg yolk and vanilla and continue beating for 3 minutes. Turn the mixer to low, gradually add the confectioners’ sugar, then beat at medium speed, scraping down the bowl as necessary, until smooth and creamy. On low speed, add the chocolate to the butter mixture and mix until blended. Don’t whip! Spread immediately on the cooled cake and down the sides.