My husband (gahh, still not used to saying it!) and I recently celebrated seven years of being together. I know, ridiculous.

To celebrate, he researched and booked dinner at Bouche On Bridge, which was a wonderful gastronomical experience on the corner of George Street and Bridge Road in Sydney’s CBD. Husband booked us a seat at the Chef’s Table (note: no extra charge to sit here), meaning we could eat our food while watching as our next meal was made. 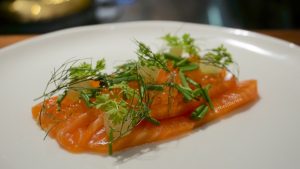 For entree, I chose the ocean trout, cucumber and roe ($20), with the ocean trout having been marinated in dill for an hour. The trout was perched on top of crème fraîche, with pickled cucumbers, chives, parsley and roe resting on top. Now, I don’t know if you’ve ever tried ocean trout marinated in dill, but oh my god was it good. And I’m talking really good. I could taste the dill with every bite, so I ended up spending a long time eating it, just to savour the taste. 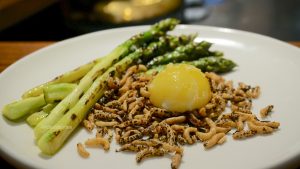 Husband chose the asparagus, duck yolk and grains ($19). I teased him about how the grains looked a bit like bugs, but he didn’t care. All he cared about was the fact that the asparagus had been salted with chicken salt. And they tasted damn good. I don’t think I’ll ever have un-chicken-salted asparagus ever again, because the asparagus was almost soaked through with the chicken salt, meaning the flavour went deeper than just the surface. The duck yolk was definitely interesting, and was very light yellow in colour. The texture made for a perfect sauce for the grains, so the whole plate really came together nicely. 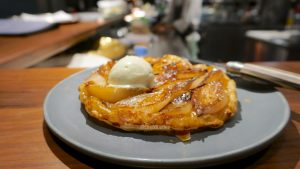 I’m not a big fan of onions. Ask anyone who knows me. At a barbecue, I’ll be the one saying no to onions. In a cafe, I’ll take out all the onions from my salad. So when I saw the Eshallot tarte tatin, with parmesan ice cream ($26), I wasn’t too sure what to do with myself. On the one hand…onions. But on the other hand…parmesan ice cream. I was so intrigued, so I ended up ordering it. It was an interesting but almost necessary combination. I wasn’t sure whether to blow on the tarte tatin to cool it down, or brace myself for the cold of the ice cream on top. What I chose to do, however, was to treat the ice cream almost like a sauce, pushing it around the tarte to ensure the parmesan flavour would sink in. And boy did it sink in. The ice cream tasted just as you would assume parmesan ice cream would taste: like a creamy parmesan sauce that had been cooled down. Yes, I did pick off some of the onions, but I finished most of the tarte and all of the ice cream. 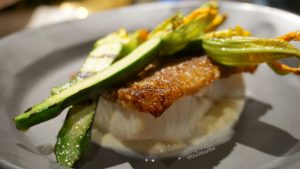 Husband chose the market fish for his main ($36), which came with zucchini flowers. I can’t say too much about it, because I was pretty focused on my own main (whoops!), but I did try some of his fish and it was so crunchy on top and full of flavour throughout. We chatted with the waiter about the history of the place, and found out it used to be a hair salon (Artis Salon, to be precise). With a downstairs area for cuts, and an upstairs area for washes, Bouche On Bridge seemed far from being a hair salon. But, looking through photos, the exposed brick was there, the stairs we climbed to get to Chef’s Table was there, and the wooden floors were there too. Amazing how something like a hair salon can be transformed into a stunning restaurant!

Next was dessert (always a favourite). Hazelnut, chocolate and malt ($19) was my choice, which came in the form of a larger version of a Ferrero Rocher. We were lucky enough to watch one of the guys make each one, and had a front-row view of it all. I’m now planning on making something similar, after seeing how it’s done. Fingers crossed it turns out nearly as good as this one did! I cracked it open, with what can only be described as a mousse pouring out. Husband enjoyed a dessert of nectarine, sorrel and honeycomb ($18), which came with dry ice. This meant we spent a good five minutes just watching the fog rise up from the mostly green dessert. As usual, I was too busy with my own dessert to really try Husband’s dessert (plus, we usually joke that I always choose the better dish anyway!), so I spent my time ooh-ing and ahh-ing at the cream mixed with malt on the side of the hollow chocolate sphere on my plate.

Okay, I think I’m done salivating while reliving our dinner at Bouche On Bridge. But at least they’ll be at Taste of Sydney this coming week and weekend! Taste of Sydney will run from the 9th until the 12th of March, so you’d better hurry. Other restaurants present include Anason, Four In Hand, Gastro Park, nel., and Porteno. Enjoy the food markets while trying some amazing food from across Sydney. And head over to the Lurpak Cookery School to get schooled on some dishes! There’s even going to be some top chefs up on the Electrolux stage to show you how to cook some of your favourite dishes.

For your chance to win two tickets, regram any of the images found in this post, and tag me (@thefdiaries) and Taste of Sydney (@tasteofsydney).