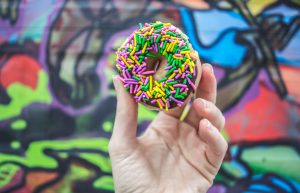 I’m a mega fan of doughnuts (seriously, it’s an issue). So when I heard about International Doughnut Day in Sydney (2nd June), I immediately went and did my research. Here’s a list of all the events and specials on for the day!

They’re available across Australia at any Krispy Kreme store. Better get in quick, though! They’ll be giving them away pretty quickly, and it’s first in, first served!

Doughnut Time will be offering three ‘mega doughnuts’, including D’oh! Nut (strawberry glaze with sprinkles), Chris Hemsworthy (red velvet doughnut with vegan cookies & cream frosting, crushed choc ripple biscuits and a vegan chocolate glaze drizzle), and Big Poppa (nutella-filled, chocolate glaze, crispy M&M’s and mini M&Ms). And seriously guys, they’re bloody humungous! They’re as big as your face! Only issue is, you’ll need to preorder it online and then pick it up in store, as it’s a limited edition offer.

Short Stop in Barangaroo will be giving out FREE Cinnamon Spice Cake Doughnuts with every order (even coffee, I assume!).

Donut Papi will be selling doughnuts at West Elm in Chatswood from 10am until everything’s gone! And the first 50 people will get a free pink doughnut (are you camping outside?).

After the success of last week’s Milk n’ Sugar dessert festival at Vivid, the team are back again over Friday, Saturday, and Sunday, bringing you delights from Nútie Donuts, Pimp My Donut, Sugar High Desserts, and more! So. Many. Doughnuts.

Mr Cafe will be celebrating International Doughnut Day with their Lemon Cheesecake Doughnut (liquid cheesecake, lemon curd, milk crumb)! Not sure if it will only be available tomorrow, but hopefully it will be on offer over the weekend too!

Culinary and creative duo Motti + Smith have curated a glow cave dessert bar of wondrous delights in the Martin Place for Vivid – step into the black lit box and light up your senses with tasty treats.

We’ll be adding to this post as we find out more info about events and specials, so keep an eye out for updates!