I’ve been waiting weeks for this, and now I can finally write it!

Five years ago, while walking from university to my then-boyfriend-now-husband’s parents’ place, I stopped in the middle of the pathway and turned to him. “I need to know something,” I said. “What are your thoughts on moving overseas at some point?” He was very quick to respond. “I think it’s so important to move somewhere completely different and start from scratch, and the job opportunities overseas for engineers is fantastic.”

And so, we agreed. We agreed that we both wanted to move overseas at some point. And then he proposed, and we got married, and we agreed that we would start looking for jobs in the US after we were married (hey, spousal visas!). So, after our honeymoon, we got to work. We agreed that it made more sense for him to get a job before me, because his earning capacity was greater (I’m in marketing, he’s a biomedical and mechatronic engineer). It’s much easier to get a job in marketing than it is for an embedded software engineer, and if I had applied for a job and gotten it, we would have to live on my salary instead of his.

We decided to set our sights on NYC. It was my dream to live there and maybe get back into the journalism industry, plenty of our friends live there, and we both have a lot of family close by. After much searching and applying, Husband got a response from a 3D printer company in Boston. Husband did the interview with them, and was flown to Boston for the final interviews. He arrived on a Wednesday night, did the interviews on Friday, and left on Friday afternoon (exhausting!).

And, of course, they absolutely loved him and offered him the job. 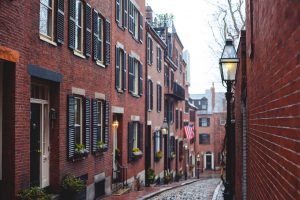 The contract is signed, both of our companies have received our four weeks notice, and we’re applying for our visas next week. We leave mid-August, and he starts a few days later. It’ll be a crazy time when we arrive; we need to sort out temporary accommodation before we leave, but need to start looking for long-term accommodation basically the day after we arrive. We need to open a bank account (something which will prove to be difficult seeing as we have no American credit history), organise furniture, and figure out how to meet new people.

Legally, I’m not allowed to work full time in the US for three months after entering, and then two months later we’re in Australia for a wedding and my dad’s 60th birthday. So, it looks like I’ll only be looking for a job to start in February (when we’re back).

Whilst I am ridiculously excited for this big adventure, I’m also having feelings of trepidation. I’m leaving my parents, my sister, my grandma, my aunt and uncle, and Husband’s family behind. I’m leaving my friends, the ones I’ve known since I was in diapers, the ones who got me through high school, and the ones who I’ve met through university and adult life. And while it might seem to all of them that I’m abandoning them, we will be back once a year. And we’ll be able to travel to Europe quite easily to meet up. And yes, we’re going to miss things. Weddings, birthdays, deaths, births, and everything in between. But we have to live, we can’t put this off any longer (especially as we don’t have kids yet). There’s always going to be something going on, something we’ll miss, but if we don’t go now, we never will. And, on top of all of that, it’s going to be ridiculously tough at first. We don’t know many people over there, have to grow accustomed to the American way of life, and will have to deal with a very interesting political system.

And what of The F Diaries? Well, a good writer friend of mine will be taking over the Sydney side of things (she’s amazing), and I’ll be shifting my focus to all the Fs in Boston, New York, and beyond!

We won’t be buying a return ticket and aren’t entirely sure when we’ll be back for good (or evil). And that’s a bit scary.