To celebrate my friend’s 25th birthday, I decided to find a Japanese nail salon so we could get some cute designs on our nails. After doing a bit of research, I chose Anticia in Neutral Bay. Their website was clean and easy to understand, their Instagram boasted lovely designs, and the location was perfect (we were off to Chatswood for my friend’s birthday celebrations afterwards).

I didn’t really know what to expect. When I get my nails done, it’s usually at one of those huge places where the nail technician spends half her time with you and the other half running around to finish off other clients’ nails. And I’m often left feeling a bit blergh, because I wanted a certain shape, or the length wasn’t just right, or the person doing my nails was a bit too aggressive, causing my nailbeds to bleed.  So, going in to Anticia, I had assumed it was something similar, just with the added element of stickers and designs.

Walking in, I felt calm. It may have been the mixture of the soft, slow music playing over the speakers, or how the nail salon felt nice and intimate, but it was such a lovely feeling. We were each ushered over to our own table, where we filled out information about our nail care, our occupation, and other details. As the nail technician was about to start on my nails, she did three things that really, really started off the experience in a positive way. 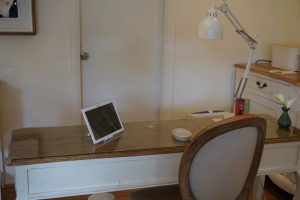 I have never, ever, ever seen such attention to detail in a hair salon, let alone a nail salon. I was absolutely blown away by the little touches about the place. Even as I left, I was given a card with my name and a number on it, and was asked to reference the number when making my next appointment.

In terms of the nails, wow. Just wow. The shape was perfect, the length was great, and the design…let’s just say I’ll be back as soon as they start to fade or peel off (which shouldn’t be for five or so weeks!). The attention to detail definitely did not stop at the look and feel of the place, but overflowed into the service. 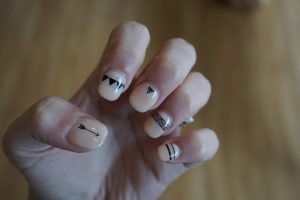 The woman doing my nails was the owner and founder of the place, and she had moved from Japan to Australia to work in a nail salon. From there, she set up her own one (Anticia) in Neutral Bay, with her sister following her to Sydney a couple of years later to work with her. What was initially a one-woman show is now staffed with six people, all working to ensure that quirky nails have a place in Sydney.