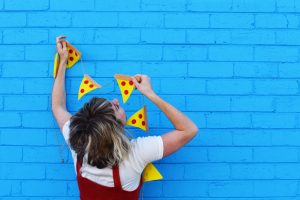 “I have the biggest girl-crush on her,” I told my husband. This was just after I reached out to Things by Bean owner Jo Power to ask if I could feature her on The F Diaries. There’s just something about the quick-witted cards that has kept me buying them over the years. When I head into one of her stockists, I usually gravitate towards all of her cards, giggling. So, without further ado…

Were you always quite creative?

Yes! It’s the most consistent thing in my life. I have a handful of super-early memories and I remember a few moments from the age of two or so, watching my mother do creative things and longing to be able to do them, too. It’s funny to think that I already had the creativity, so what I was longing for was basic motor skills! When I got old enough, I started self-publishing magazines, newsletters and novellas to family and friends. And, I kid you not, I loved making my own greeting cards from a young age — I liked to make them as silly as possible. I was always drawing and glueing and inventing.

How did you start the business? 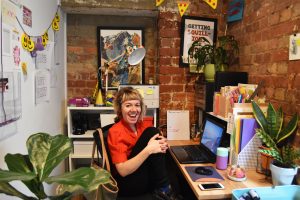 It began as a little notebook, which I carried around in my purse for almost a year. In high school, I got into the habit of keeping a notebook with me at all times so I could write down ideas. So, I was still carrying a notebook around, but this notebook was specifically dedicated to snappy one-liners. When the notebook was nearly full, I figured I should chuck the zingers onto cards and see what happened! I picked my ten favourite ideas, got them printed locally, and carried them around in a biscuit tin for awhile. At last, I started going into shops and showing the owners the contents of my precious tin. That’s how I got my first few stockists and the stockist list ballooned big time when I started doing trade shows.

Which card(s) do you have a soft-spot for?

I love this question because I’m often perplexed by why certain cards are so popular while others aren’t. Sometimes I make a card and I know with 100% certainty it’s going to go well. But sometimes, I’ll make a card that I’m incredibly proud of and it flops! As for the former (popular cards I’m a softie for), I would have to say:

Marriage: When Twoesie Become Onesie: This one is near and dear to my heart for a weird reason. The onesie on the card is based on a real onesie that I own. And for a few years, I used to stuff the onesie with pillows and blankets and set it up around the house for my partner to discover when he got home to an empty house. The onesie might be playing the XBOX, taking a nap in bed or reading a book with a cup of tea!

Let the Cake Murder Begin: I was so happy with my brain when this card burst out of it! I absolutely love, and always have loved, things that blend the cute with the creepy. My favourite things in life are anomalies or at the very least, juxtapositions – whether it’s a concept for a card, someone’s personality or a song.

The Birthday Cat (the cat with the candle taped to his head): This guy gets me every time! I made this card about a year before I released it because I thought it might not go over well. But every time I revisited the file in my card design folder, the cat’s serious little face made me chuckle and I finally decided to unleash him on the card industry!

Now for the cards that flopped!

If Only Birthdays Could Last Forever: When I got this idea, my heart raced! I was so excited about it. It’s kind of conceptual, which can be dangerous for card designs, but I thought it would work. It sells here and there, but overall, it’s a pretty poor performer!

If I Had a Voodoo Doll of You… I Wouldn’t Poke It: I love this one for the same reasons I mentioned about the cake murder card above. It’s really quite a creepy card but there are cutesy elements creating the contrast that I love so much. This one is somewhat well-received; people actually seem to really like it in theory, but it’s not often purchased. Maybe it’d be better as a little wall art print rather than a card!

Put On The Disguise… In Case We Break The Law: This one is actually discontinued. It was painful for me to discontinue it because I truly love it. But it didn’t sell well AT ALL! It had those words and a little drawing of one of those glasses/nose/moustache disguises. I think those glasses are so funny in general and I love the idea of a couple of best buds chucking on their disguises and getting into some birthday mischief. But I think maybe that idea wasn’t clear enough and people weren’t sure what occasion the card should be given for! 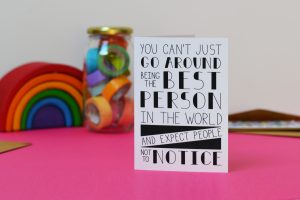 To be honest, a lot of my card ideas pop into my head fully-formed. They often claw their way into my consciousness when I’m laying in bed, just about to fall asleep. You know that state you’re in when your body is just starting to accept that it’s sleep time and you start feeling a bit heavier, and warmer and hazier? That’s when! Which is actually a pain in the ass because then I have to reach for my phone and jot the idea down.

It feels like they come out of nowhere, but now that I think about it, they’re the end result of a barrelling, high-speed train of thought. So, with the card that says “I Wish You Were Rice So There Would Be Lots and Lots Of You”, I think I had been craving cereal for a few days and I was pondering cereal in general and thought how a bowl full of a hundred of the same exact thing is so funny and said to myself, “Oh cereal, so much of a good thing.” And bickity bam — the card came to me!

Do you ever hit a wall when coming up with content and visuals?

The words are never a problem. I have an ideas list in my Evernote longer than both my arms. But sometimes I do find it quite tricky to get the visuals right. I’m a natural wordsmith — copywriting was my trade before morphing into a card designer. And to become a card designer, I had to teach myself how to use design software. My cards used to be words only and that was so easy! But with more recent cards, I’m getting back into drawing and experimenting with different looks. It’s very hit and miss; sometimes I’ll nail it on the first try and sometimes I do eight versions and still don’t think it looks right.

“The world is full of awesome everyday aesthetics”

How do you keep your creativity flowing? 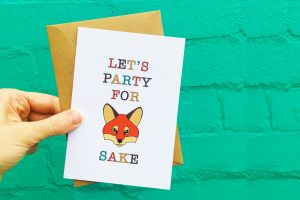 It’s always flowing, so for me it’s a matter of managing it and not getting really frustrated when I don’t feel like I have time to channel it into something. I had a baby a year and a half ago and one of the biggest challenges of early motherhood was not being able to execute an idea whenever I wanted.

The “idea lists” I mentioned are really helpful; I chuck ideas into them every day, whether it’s a card idea or a brainwave about a crazy cake, DIY party decoration for the Things by Bean blog, a new segment idea for my monthly fun-letter called Bean Mail, or something to talk about on Things by Bean’s podcast, Happy Birthday Podcast. I also try to pay attention to typography and colour palettes everywhere I go. Once I started paying attention, I realised that the world is full of awesome everyday aesthetics.

If, like me, you have a super big crush on Things by Bean, you can shop her online store, read her blog (new posts every Wednesday!), and follow her colourful antics on Instagram.